In Studio 5000, open the Input_Analog_Custom routine in the Input program of the S88Builder Task.

1. Rolling Timestamp – Start a new rung and move the input module’s rolling timestamp into the RSlots[rss].Analog.RollingTimeStamp; where r is the rack ID and ss is the slot ordinal.  If the module does not have a rolling timestamp, then use the generic RollingTimestamp controller tag. This is required by the engine to know how much time has passed between analog updates. Ideally, you would stop moving the timestamp in if you know the analog value is stale. The instrument object will revert to fail-safe value if it detects a stale input (i.e. rolling timestamp stops updating).

2. Input Channel – enter a new rung for each input channel following the rolling timestamp rung above.  This rung needs to move the raw data into the RSlots[rss].Analog.Ch[p] tag; where p is the I/O point ordinal.  In addition map the channels fault bit, under/over range and wire-break to the appropriate analog RSlot members as illustrated below: 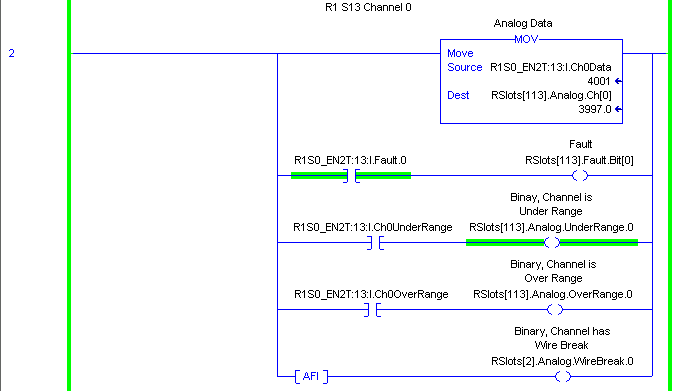 3. Repeat step 2 for all channels and repeat from step 1 for all analog input slots

4. Example VFD analog input – VFDs have digital and analog signals. The analog inputs must be handled here the same as a normal analog input as shown (the point selection for these signals are defined in the VDF CM options):