The campaign manager, CPM, is a service that manages a campaign by executing batches of a specified recipe in stations of a process train until the specified number has been produced. CPM.

An S88 Builder campaign is simply a required number of batches to run of a specific recipe.  There are also a couple of optional specifications that may be configured.  The campaign must also be assigned a train to run on. 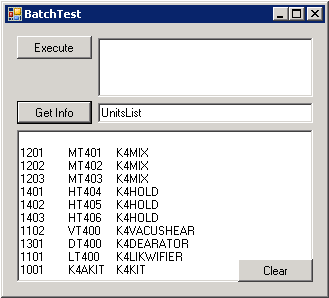 A process train is a collection of one or more units and associated lower-level equipment groupings that have the ability to be used to make a batch of material.  A train is independent of the campaign that is running on it.  In other words, a campaign must be assigned a track before it may be executed and managed.

A unit is a collection of physical equipment and the control logic that carries out one or more major processing activities.

NOTE: Campaign manager is not responsible for pulling down campaigns from BPCS or validating the campaign.  The CPM assumes the campaign is valid once it has been started.

NOTE: Once launch a campaign runs independent of BPCS and allows the operator to modify its parameters.  This may not be the desired behavior so security may be used to limiter operator interaction but then a method may need to be developed to update the campaign parameters from BPCS gateway if required.  This would most likely be done through an HMI window.

Prominent characteristic or something added as a special attraction.